1-10-1 is a simple way to remember the first three phases of cold water immersion and the approximate time each phase takes. Although the times are variable based on differences in body weight and water temperature (see graph below), just remember 1-10-1:

1 Minute to get your breathing under control

COLD SHOCK RESPONSE. An initial deep and sudden gasp followed by hyperventilation that can be as much as 6-10 times greater than normal breathing. You must keep your airway clear and above water or run the risk of drowning. The Cold Shock Response will pass in about 1 minute. During that time concentrate on avoiding panic and getting control of your breathing. Wearing a lifejacket during this phase is critically important to keep you afloat and breathing. 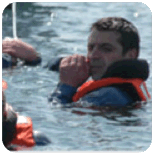 COLD INCAPACITATION. Over the next 5-15 minutes you will gradually lose the effective use of your fingers, arms and legs for any meaningful movement. Concentrate on self-rescue initially, and if that isn’t possible, prepare a way to keep your airway clear while you wait for rescue. Swim failure is one example of cold incapacitation, and will occur within these critical minutes. If you are in the water without a lifejacket, or something to hold on to, drowning is likely.

1 Hour before you become unconscious due to hypothermia

HYPOTHERMIA. Even in ice water it could take approximately 1 hour before becoming unconscious due to hypothermia. If you understand the aspects of hypothermia, techniques of how to delay it, self-rescue and calling for help, your chances of survival and rescue will be dramatically increased. 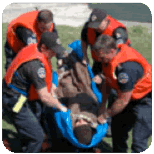 The graph below shows the variation in time to fatal hypothermia based on gender and body mass. Who has the advantage here? 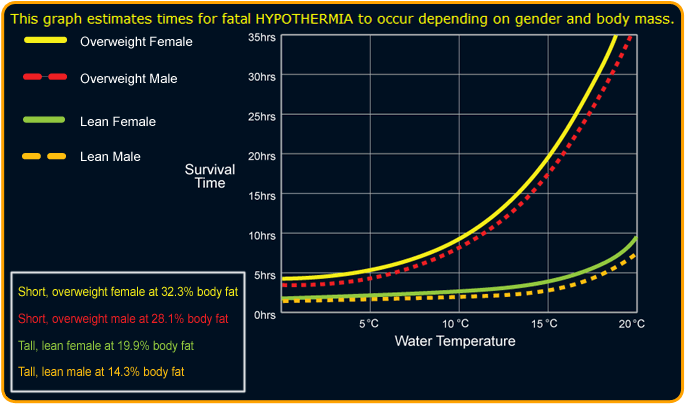